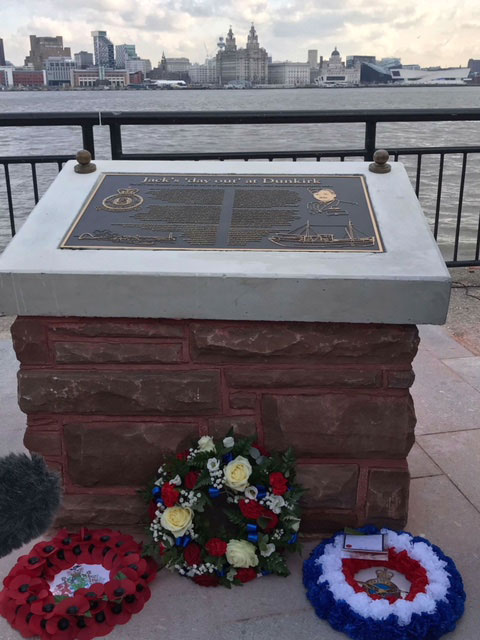 Some members of the Wallasey Choir braved the wintery cold conditions to help commemorate the life of local Hero Jack Potter.

Wallasey-born pilot Jack Potter is not mentioned by name but the moment in Christopher Nolan’s movie 'Dunkirk' that a pilot ditches his Spitfire into the sea after an engine seizure is based on his own experience. Sgt Potter, who also served in the Battle of Britain, took part in the rescue of 200 service personnel from HMS Basilisk when it was sunk by German aircraft during the Dunkirk evacuation in 1940.

Video if the event https://youtu.be/Cehoa6Ln-ps

Although Jack bravery had been celebrated elsewhere there was no mention in his home town. A riverfront memorial to a Second World War hero who inspired a scene in the recent hit film was unveiled by the Mayor of Wirral and Family and friends of the airman, including his son Robert, travelled from as far afield as Australia and Canada for Wednesday’s service on Seacombe Promenade in Wirral, Merseyside.

At the end of the service the Wallasey Choir sang ferry cross the Mersey to honour Jacks father who worked on the Mersey Ferries.

The Mersey Ferry sounded its horn as it passed by the memorial and unfortunately due to the adverse weather conditions the fly-by of a spitfire from Jacks squadron did not take place.

A fitting day for a local hero.